The Oxford University and AstraZeneca vaccine trials reached 90% efficacy by accident thanks to the “serendipity” of an error that led to some participants receiving half doses, it has emerged.

On Monday scientists revealed that the Oxford vaccine had an overall efficacy of 70%, but could be around 90% effective when administered as a half dose followed by a full dose a month later.

“The reason we had the half dose is serendipity,” said Mene Pangalos, executive vice-president of biopharmaceuticals research and development at AstraZeneca.

When university researchers were distributing the vaccine at the end of April, around the start of Oxford and AstraZeneca’s partnership, they noticed expected side effects such as fatigue, headaches or arm aches were milder than expected.

“So we went back and checked … and we found out that they had underpredicted the dose of the vaccine by half,” said Pangalos.

Instead of restarting the trial, he said researchers decided to continue with the half dose and administer the full dose booster shot at the scheduled time.

About 3,000 people were given the half dose and then a full dose four weeks later, with data showing 90% were protected. In the larger group, who were given two full doses also four weeks apart, efficacy was 62%. 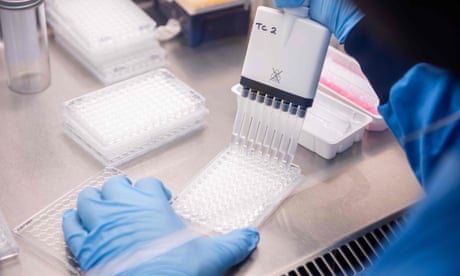 Scientists said they still could not fully explain why the half dose gave better protection, but said it may be that it triggers the immune system differently.

Prof Sarah Gilbert from Oxford University, who led the research, said: “It could be that by giving a small amount of the vaccine to start with and following up with a big amount, that’s a better way of kicking the immune system into action and giving us the strongest immune response and the most effective immune response.”

Prof Andrew Pollard, director of the Oxford Vaccine Group and chief investigator of the trial, added: “What we don’t know at this moment is whether that difference is in the quality or the quantity of immune response. And that’s something we’re going to be digging into over the next weeks.”

The vaccine still needs to be approved by the Medicines and Healthcare products Regulatory Agency, but could be made available in the coming weeks if given the go-ahead.

vamtam-theme-circle-post
 Category Articles, What's New & Archive
After taking a month off from our regular newsletter to bring you our Year In Review,...
Read More

vamtam-theme-circle-post
 Category Articles, NEWS, What's New & Archive
People and the planet are only as healthy as the ecosystems we all depend on....
Read More